The Telapón stratovolcano belongs to the northern part of the Sierra Nevada, in the central-eastern part of the Trans-Mexican Volcanic Belt. Geologic, stratigraphic, and geochemical studies as well as K-Ar age determinations were carried out in this volcano formed by dome structures, lava ﬂ ows and pyroclastic deposits. The lithology was grouped into two volcanic events: an andesitic-dacitic Lower Volcanic Event that was emplaced between 1.03 ± 0.02 and ca.0.65 Ma, and a dacitic-rhyolitic Upper Volcanic Event emplaced between ca.0.65 Ma to ca.35,000 years ago. The summit of the volcano (4,060 m a.s.l.) is occupied by a 274, 000 years old (K-Ar date) dacitic lava ﬂ ow. Block and ash ﬂ ow pyroclastic deposits and pumice fall deposits ca. 35,000 years old crop out on its ﬂ anks. The new K-Ar ages indicate that the volcanic activity of the Telapón volcano was coeval to the activity in the Sierra Nevada.

Phenocrystals of the porphyritic lava ﬂ ows show evidence of disequilibrium and magma-mixing. The SiO2 vs. alkalis diagram shows that most rocks are classiﬁ ed as basaltic andesite, andesite, dacite and rhyolite (53 – 78 wt. % of SiO2), following a calc-alkaline trend. The trace element patterns are similar for all samples indicating a common magmatic source. These patterns display enrichment in the large-ion lithophile elements (LILE: Cs, Rb, Ba and K) and Pb relative to the high-ﬁ eld-strength elements (HFSE: Nb, Ta). Chondrite-normalized REE patterns display light rare earth elements enrichment (La-Sm) with respect to the heavy rare earth elements (Eu-Lu), which have ﬂ at patterns. These chemical characteristics are typical of subduction-related volcanic arcs, where the LIL elements could be provided by dehydration of the subducted plate into a depleted mantle.

Crystal fractionation processes from a parental basaltic andesite magma can explain the lithological and geochemical variations of the volcanic rocks. However, magma mixing and assimilation processes modiﬁ ed the magma composition. The fractional crystallization and probable crustal assimilation seem to be more important in the Telapón stratovolcano compared with the southern part of the Sierra Nevada. 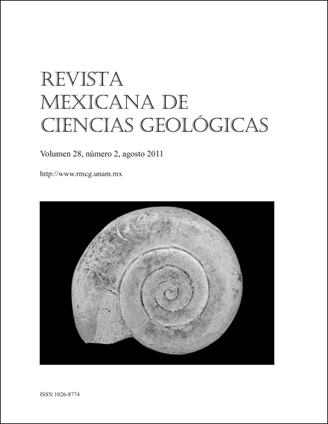