A promissory low-to-medium temperature geothermal system located in Sonora (Mexico) has been studied. In the present work, a detailed geochemical survey was carried out to understand the hydrogeochemical signatures of hot spring waters. A field work campaign was conducted for collecting water samples from twelve hot springs placed in four major zones (NW, NE, C, and S). The collected samples were analysed by chemical and isotopic methods for determining their chemical (major and trace elements) and isotopic (18O/16O and D/H) compositions. Using geochemometric analyses of the fluid composition and fractionation, depletion and enrichment processes exhibited by major and trace elements were analysed.

Hydrogeochemical classification was used to indicate the presence of sodium-sulphate (Na-SO4) waters in the North (NW and NE) and South hydrothermal zones; whereas calcium-magnesium-bicarbonate (Ca-Mg-HCO3) waters were identified for the Central zone. Some hot spring waters located in the NE zone were also typified as sodium-bicarbonate (Na-HCO3). In relation to the isotopic signatures of 18O/16O and D/H, four water samples from NE and C zones lie near to the global meteoric water line; whereas the remaining eight samples showed a shift for both oxygen and deuterium isotopes. A mixing line with a small shift of δ18O was identified and used as a proxy to discriminate waters with different isotopic signatures.

After applying a geochemometric outliers detection/rejection and an iterative ANOVA statistical test, the mean temperature inferred from the most reliable solute geothermometers was 149±40 °C, which suggests to be considered as the minimum value of the reservoir temperature. As most of the hot spring waters fall outside of the full equilibrium curve, the original reservoir conditions were corrected by using a mixing conductive model, which predicted a deep equilibrium temperature of 210±11 °C. As this temperature is considerably higher than the mean temperature inferred from the geothermometers, it was suggested as an optimistic maximum reservoir temperature of the Sonora geothermal system.

Using 150 °C and 200 °C as rounded-off reservoir temperatures (or min-max estimates), geochemical equilibria modelling based on fluid-mineral stability diagrams was carried out. An equilibrium process among local hydrothermal waters and albite-potassium feldespar and muscovite-prehnite-laumontite mineral assemblages was found. These minerals were proposed as representative mineral assemblages of low-grade metamorphism, which seems to indicate that the geothermal fluid equilibria were probably reached within the intermediate to acidic volcanic rocks from the Tarahumara Formation. 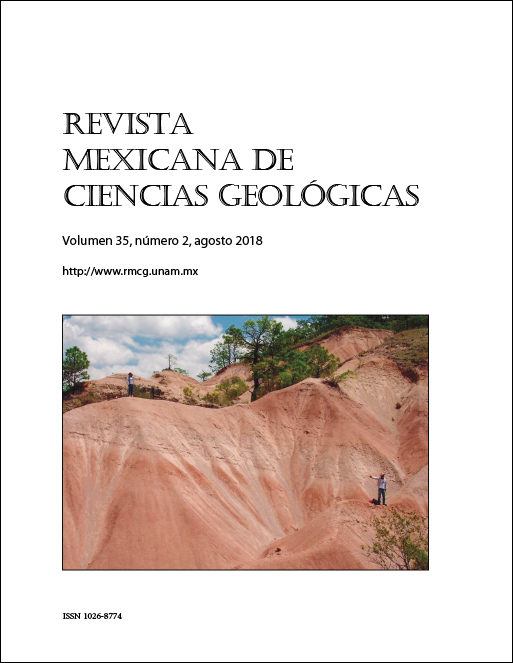