New geological mapping and U-Pb dating of detrital zircons and volcanic rocks permit stratigraphic revision and interpretation of pre- Late Permian deformation in the Sierra Plomosa area, located 95 km east of the city of Chihuahua and at comparable distance to the southwest of the border town Ojinaga. The Plomosas area forms the central part of a north-northwest trending uplifted block ranging from Placer de Guadalupe at the north, to the cerro Carrizalillo at the south. Along this elevated block, Precambrian crystalline basement rocks are exposed, as well as lower Paleozoic rocks belonging to the southern platform of Laurentia and upper Paleozoic to lower Mesozoic clastic and volcaniclastic rocks. The main structures in the area are north-northwest trending folds and thrust faults showing a west-southwest vergence or tectonic transport, being the age of this deformation, necessarily pre-Late Permian, given the occurrence of an erosional and angular unconformity between strongly deformed pre-Permian strata and less deformed Permian-Triassic clastic and volcaniclastic deposits which contain Archean (3,022–2,513Ma), Paleoproterozoic (2,461–1,601Ma), Mesoproterozoic (1,592–1,013Ma), Neoproterozoic (994–546Ma) and Paleozoic (533–252Ma) detrital zircon populations, with maximum depositional ages calculated between 252 and 244 Ma and isolated concordant zircons as young as 227 to 223 Ma. In the middle part of the permo-triasic succession, a Permian rhyolitic flow or ignimbrite was previously reported on the basis of a lead alpha age, however, during the present research this rock yielded an Early Jurassic age of 183.3+2.2/–2.7 Ma. On the basis of petrographic features and field relations, the rhyolite is interpreted as an ash flow tuff or ignimbrite, similar to other rhyolitic flows observed in the area. Such flows are concordant to bedding and several clasts of this rock are present in strata overlying the rhyolite. All Paleozoic rocks, including the top of the Permian and Lower Triassic, underlie clastic and volcaniclastic Jurassic rocks of shallow marine origin. In the area was also documented an erosional, locally angular unconformity which separates a Lower Jurassic unit from a Middle (?) to Upper Jurassic unit with previously reported Late Jurassic fauna in the upper part of the succession. Limestone layers in the upper part of the Jurassic succession, are recrystallized as marbles, especially in the area of the Plomosas mine, where both the metamorphism of these limestones and the presence of stratabound ore bodies of lead and zinc seem to be related to thrusting with a tectonic transport to the southwest and northwest, that placed very fractured Permian sandstones and siltstones over the Upper Jurassic rocks. The faulting is possibly associated with transpression along the so-called Plomosas lineament and transcurrent faulting, described as a left lateral shear of the basement whose regional trace lies along the eastern front of the sierra. Finally south of the Sierra Plomosa, in the northeast trending Sierra de Santo Domingo Carboniferous and Permian limestone are thrust over Jurassic sandstones and shale. This thrust fault also cuts a rhyolitic dyke of probable Oligocene age and can be considered as a very late laramide shortening contractive structure, possibly related to transpressive deformation along the Plomosas lineament and its interaction with the uplifted Cerro Carrizalillo block 15 km to the South of Plomosas. 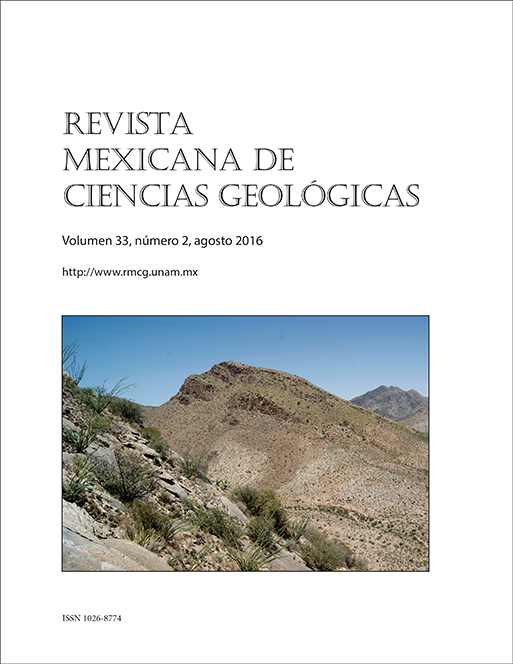