a)  Pycnodonts (formally into the order Pycnodontiformes) are all extinct fishes.

b)  We could not find references to a fish genus named Sparassius (=Sparassis), because this name correspond to a fungus and not to a fish (Dai et al., 2006).

c) Ptychodontids are sharks having a characteristic crushing dentition that allowed the shark to feed on hard bodied preys, such as mollusks. This is clearly attributed to Cappetta (1987), actually a world specialist on sharks.

d)  Nowhere in Blanco-Piñón et al. (2007) we wrote “pycnodonts”, and the triangulation Ptychodus-Pycnodontids- Sparassius expressed by Stinnesbeck et al. is out of order. After the carefully review of Ifrim et al. (2005), we consider that this mainly arises from their report of some similarities in the body form of Nursallia and Sparus (not Sparassius). However, we did not find any analysis to support the comparison of the diet, food habits or mouth mechanisms between Sparus, pycnodonts, and sharks. Actually, the comparison between the dentition and diet of these osteichthyans (Nursallia and Sparus), and that of chondrichthyes (Ptychodus) is not easily supported nor formally published. Finally, Blanco and Frey (2001) provided a discussion about the diet of Nursallia sp., which was not cited in Ifrim et al. (2005).

a)   Ptychodus mortoni was reported in Blanco et al. (2001), and Blanco-Piñón et al. (2002) as a part of the Vallecillo Member assemblage and W. Stinnesbeck, L.G. Lopez Oliva and D. Frey were co-authors in those publications. In Blanco-Piñón et al. (2007) we reported that FCT-341 was collected from the uppermost part of the Vallecillo Member (and not discovered in a small museum situated at Vallecillo, as mentioned by Stinnesbeck et al.), almost in contact with the dark-gray, non-platy unit of the Agua Nueva Formation. That could explain the grayish micrite matrix of the rock that contains the teeth of FCT-341 (see Blanco-Piñón, 1998).

b)  Stinnesbeck et al. argued that we omitted to refer “the record of P. mortoni from the El Rosario quarry, Coahuila, described by Stinnesbeck et al. (2005)”. However, the latter authors just provided imprecise and/or tentative identification of the fish fauna in this locality when wrote “These fishes have apparently been collected randomly at El Rosario and other quarries in the area from coeval sediments of the same depositional area. The following taxa have been tentatively identified by one of us (L. Cavin) on the basis of photographs: Ptychodus cf. P. mortoni Agassiz, 1843 (Figure 4a)” (Stinnesbeck et al. 2005, p. 407). In addition, the tooth in their fig. 4a does not show the characters of P. mortoni.

c)   The assignation of FCT 341 as the oldest record of

P. mortoni in the world was based on the presence of Watinoceras coloradoense. This ammonite was collected from the same level where FCT 341 was collected and was housed in the Colección Paleontológica de la FCT as unidentified specimen under the catalogue number FCT-257. Later, the specimen was identified by Wolfgang Stinnesbeck as Watinoceras coloradoense, and this is the data we used in Blanco-Piñón et al. (2007). Besides, such species of ammonites has been considered as a Lower Turonian ammonite (see e.g., Aguilera-Franco, 2003).

d)  The paper by Ifrim and Stinnesbeck (2007), with information about a detailed taxonomic and biostratigraphic distribution of the ammonites of the Vallecillo Formation at Nuevo León, was published in June, 2007, and was thus not available at the time our manuscript was accepted for publication (November, 2006).

Finally, we deeply thank Stinnesbeck et al. (2007) for his comments on the article and for providing new information concerning the Vallecillo assemblage. 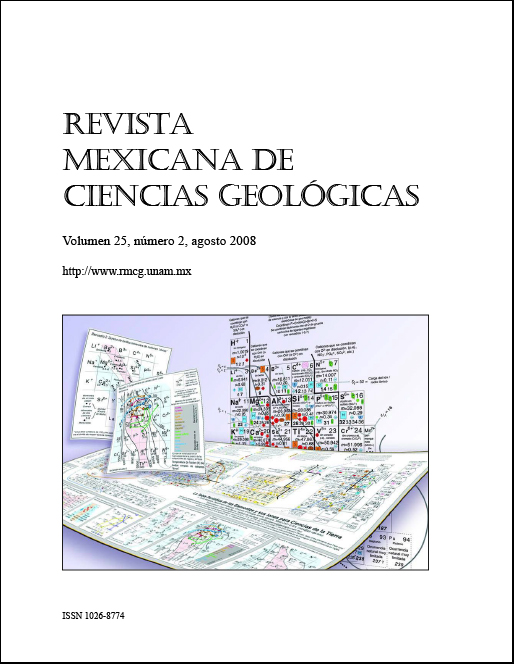