Hoya de Estrada is one of the explosion craters (maar volcano) forming the Valle de Santiago volcanic field, (Guanajuato), México. It is located at the northeastern corner of Michoacán-Guanajuato volcanic field, within the central part of the Transmexican Volcanic Belt. The crater Hoya de Estrada is one of the few maar type volcanoes of rhyolitic composition. The Hoya de Estrada geologic evolution comprises two main stages: an explosive one forming the maar crater, which was followed by an effusive stage. The maar-forming stage includes two main units separated by a local erosive contact. The lower unit is characterized by sequences of indurated ashy surges interbedded with some massive layers of clast-supported coarse lapilli, composed predominantly of rhyolite pumice and lava, in addition to accidental lithics. The upper unit is composed of medium to coarse lapilli massive fallout layers, which are intercalated with a few thin, indurated fine ash beds. This upper unit includes a basal part with abundant rhyolitic pumice and lava clasts (SiO2 ~77 %), which exhibits small enclaves of mafic magma (basaltic- trachyandesite). The presence of these products suggests periodic injection of basaltic-trachyandesite magma (SiO2 ~55–56 %), while rhyolitic magma rises during the emplacement of this unit. Injection of mafic magma should have played an important role in reducing the water/magma ratios, and increasing the volume of magma. Therefore, it may have changed from one phreatomagmatic eruption (rhyolitic magma) to a magmatic spatter-lava eruption (basaltic-trachyandesite magma), which occurred within the crater. The preferential distribution of the pyroclastic deposits of the upper unit, as well as the spatter rocks to the west, suggest a possible migration of the eruptive locus into that direction, and this may be controlled by the regional E-W-trending structural system. 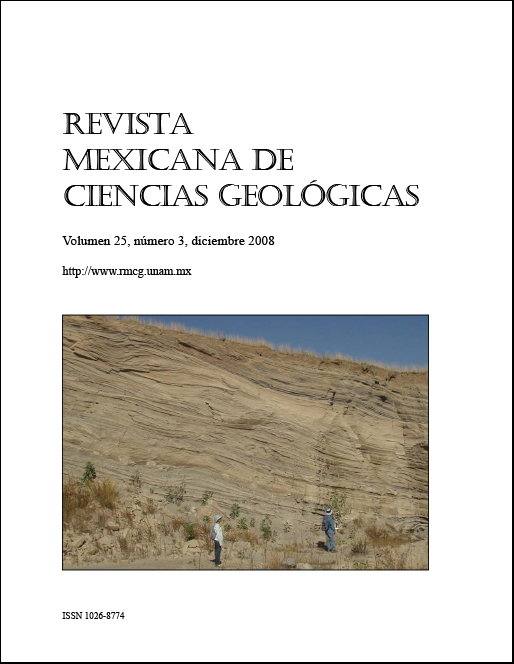