Rare earth elements dissolved in groundwater and its relation with the flow systems in marine and volcanic rocks in the Bajío of Guanajuato, central Mexico

Rare Earth Elements (REE) - series of lanthanides - were used to determine the water-rock interaction process in two geological provinces in central Mexico: the Mesa Central (MC) and the Trans-Mexican Volcanic Belt (FVTM). Ninety-four groundwater samples were collected from fractured and granular aquifers in the southwestern part of the State of Guanajuato, from which REE concentrations were analytically determined in all of the samples. The geochemical software PHREEQC was later used to determine aqueous speciation, saturation indices with respect to mineral phases and mixing. The results show that the anomalies of cerium (Ce) and europium (Eu) are characteristic in the determination of water-rock interactions. The negative anomalies of Ce are associated with groundwater circulating through a carbonated-marine Cretaceous aquifer; whereas the negative and positive anomalies of the Eu are associated to fractured aquifers of MC and FVTM. The REE are incorporated into the groundwater by dissolution of minerals present in the rocks and their concentration is controlled by pH, coprecipitation and sorption processes. The presence of negative anomalies of Ce, in the fractured and granular aquifers above the carbonated aquifer, suggests an hydraulic continuity between them through faults and fractures connected to depths greater than 1000 m. This behavior is consistent with the Gravitational model of Groundwater Flow Systems (GFS) Tóthian-Freezean, so the REEs act as natural tracers in defining the regional flow in this complex geological environment and confirming the importance of considering the residence time and vertical components of GFS in groundwater management. 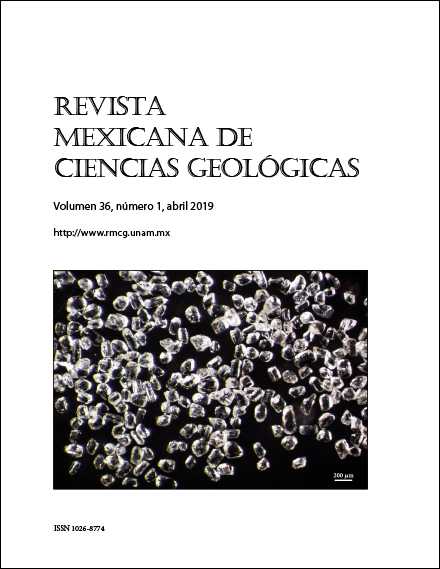